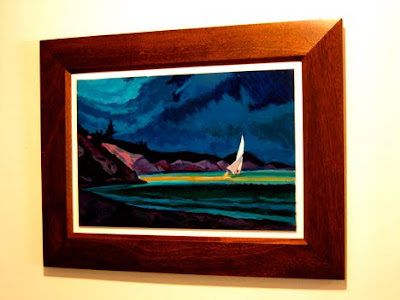 Brought five new pieces back from my framer yesterday. I feel like a proud mama who's just bought a new suit for my little boy and wants to parade him around to show him off. Like the new suit, a new frame casts a grown up light over the paintings. Especially so with the smaller oils as these were. Above is The Reach, 10 x 15". 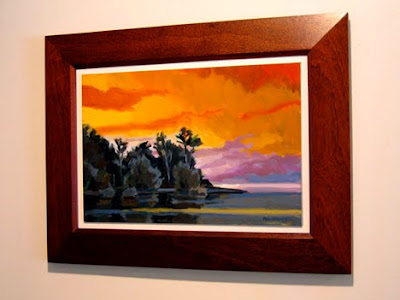 And here above, in its fetching new attire, is Quiet Shore: Yellow, also 10 x 15". My frames are custom made in mahogany by an artist who really knows what he's doing with precise woodworking and who takes real pride in his work.
I realize my blog has been negligent in the last few months in terms of posting images of little animals. To rectify that I took a picture of my neighbor's cat Isabella yesterday gorked out on the doorstep in our East Coast heat wave. Isabella was the subject of one of my blog posts a few months ago. She tends to hang out in my garden, hiding in the bush nearest my bird feeder. Wonder what she's up to when she's doing that? But yesterday the heat just got to the gal and she had to get some z's. I tried to approach without waking her, but she snapped to attention before I was anywhere close. How do cats do that? 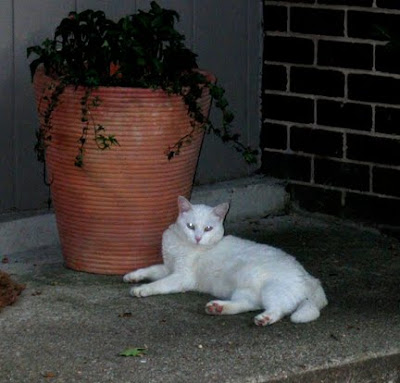 OK, back to art....
Below is an oil I have been working on on and off for a couple of years. I finally got it to where I wanted it, but realized I needed to change its title. It was called Full Moon, High Tide III but that seemed too confusing. I wanted something succinct. While I sat rummaging through possibilities in my mind, a woman who lives with the neighbor who owns Isabella the cat walked by holding the hand of her little 1 1/2 year old daughter. The little one is a real sweetheart. He name is Luna. Bingo! 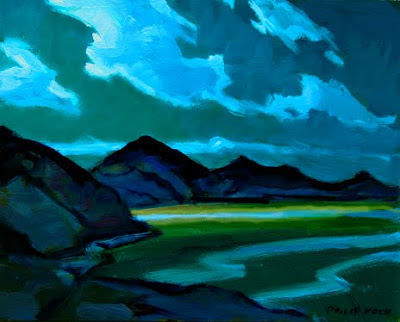 Philip Koch, Luna, oil on panel, 8 x 10", 2010
This is a painting that's based on one of the walks I took under a full moon while staying in Edward Hopper's former painting studio up on Cape Cod. We go there in the fall when the little town of Truro is mostly deserted. At night then one sees the night sky without most of the distracting lights of the summer cottages. The light of the moon shining down on the clouds feels solemn and monumental. One realizes how big the sky truly is. 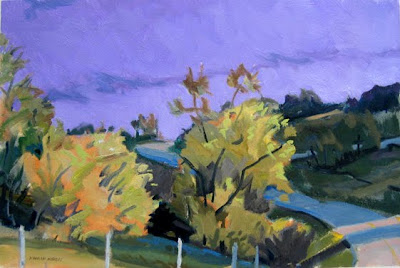 Philip Koch, Towards Evening, oil, 13 x 21", 2010
And here's a painting begun outside of a road winding its way around the swell of a hillside. From where I painted, the road presented an elegant arc as it rose to go around the hill. It was nearly sunset and my eye was caught by the way the one shadow cast across the lower right roadway ran diagonally across the painting exactly parallel with the far edge of the hillside.
It's a small thing to discover, but little nuggets like that can provide the magic glue that visually holds a painting together. When you think about it, that's one of the things that draws us to art. So often all of us feel our lives are too fragmented and confusing. We long to sense a world where the differing and unique forms come together and dance as one before us. Our job as artists is to keep looking such connections and then sharing them through our painting.
Art philosophy Cape Cod Edward Hopper